With her own particular brand of canine charm, Rickii welcomes visitors to the Marc Whitney Gallery, and she’s impossible to resist. Not that folks need encouragement to enter – it’s Whitney’s art work that brings people in – but Rickii likes to make sure no one walks by the Forest Avenue gallery without an acknowledgment from her.

She’s especially fond of children and as they wander by, she runs to get her favorite toy to entice them in. “A lot of locals know her, and she recognizes them as they pass by,” said Jackie Whitney, Marc’s wife of 37 years. “She also loves babies and little dogs. There was a little white dog who came in that she was in love with and every time the dog tried to leave, Rickii stepped on its tail.”

Rickii keeps a close eye on the sidewalk from her vantage point at the door –Jackie said she never ventures beyond that point – and it’s probably safe to say that she loves everyone who walks by the gallery.

However, as happy as she is in her designated spot, Rickii likes day trips too, and she gets plenty. Whitney takes her along while he paints – at the beach or other sites. 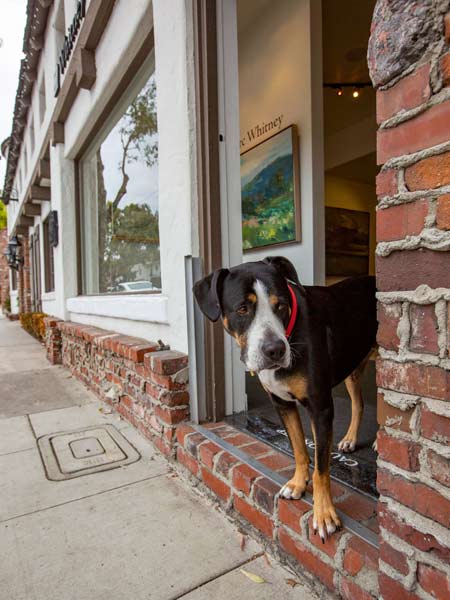 Rickii on the lookout for locals

A key part of the Whitney team that visitors encounter at the gallery, Rickii – along with Whitney who is often there on Saturday painting and Jackie, who runs the gallery and serves as art consultant – takes her job seriously.

“We’re a package deal,” Jackie said. (On most days, Whitney works at his studio in San Clemente.)

The Whitneys adopted Rickii – a Boxer, Swiss Mountain Dog, Shepherd mix – from Love Bug, a rescue in Corona del Mar, when she was 4 months old. She’s now 6 years old and has been coming into the gallery almost every day – except when Jackie and Marc’s son and daughter are home, then she prefers to stay with them. Their 22-year-old daughter Olivia, a film major at UC Santa Cruz, graduated last spring and has worked for Fox on 9-1-1: Lonestar and NCSI LA. She now works for a camera company that leases equipment to studios. Their 19-year-old son Jack, a freshman at UC Riverside, is studying history and political science where he is on the chess team. “He accumulated a lot of trophies from his elementary years winning school tournaments with Academic Chess,” Jackie said.

It’s apparent that Rickii inherited some good canine genes. According to the American Kennel Club, the Swiss Mountain Dog is more than willing to make friends with new people. And since they were watchdogs, that heritage means this breed still functions as a sentinel with a deep bark of warning and alert. Since Rickii constantly scans the sidewalk for passersby, she surely possesses the watchdog gene, but she doesn’t bark at them.

However, if she feels uneasy about a visitor, Jackie said, “She alerts me by coming to sit by me, but I don’t know whether she’s trying to protect me or she’s scared.” 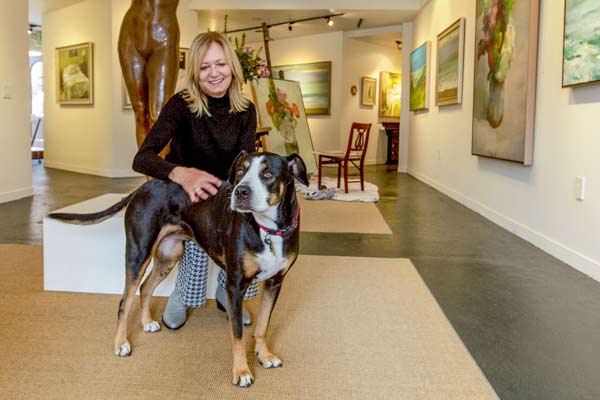 Needless to say, there’s a lot of foot traffic on Forest Avenue. “We have people come in and buy, and they didn’t even know they wanted a painting,” said Jackie.

In 2009, the gallery moved to its current location from North Laguna’s Gallery Row. “I love the neighborhood feel of downtown,” Jackie said. “I’ve gotten to know the shop owners and made so many friends.”

There’s no doubt that Whitney’s work is instantly recognizable – from his bedroom scenes to his seascapes and florals. His still life pieces have been described as “a slice of life” and harken back to memories of times at the table with family and friends. Whitney is also known for his sculptures – he comes from a family of sculptors.

Jackie explained the imaginative nature of his work, “Marc’s work is so peaceful and soothing. It has its own magic that takes you away to that special place whether it’s the rumpled sheets of the unmade beds, the table setting or the beautiful views we see – or want to see. They all have a poetic feeling to them that lets you escape. The viewer gets drawn into the painting.”

His seascapes are so calming that an attorney in China purchased one to hang in his arbitration room.

Whitney has a long history as a local artist. Born in Southern California in 1955, he grew up here during the ‘60s. When he was 14, he received a scholarship at Laguna Beach School of Fine Art (now the Laguna College of Art + Design, (1970-1983) where he met Roger Armstrong who took Whitney out painting and introduced him to watercolors.

Rickii taking a moment to relax

One memory of those times is anything but artistic. “As part of his scholarship, Marc helped clean up at the school,” said Jackie.

“After Philadelphia, in 1991, we came back to Orange County because our families were here, and we thought, ‘where else would you go to sell art in Orange County except Laguna Beach?’” Jackie said. “Marc met a lot of the local artists when he was a kid taking summer classes at Laguna Beach School of Art, now LCAD. He went to local artist Vincent Farrell – who he knew back when he was taking art classes – for advice and Vincent said, ‘Open your own gallery,’ so we did, and now here we are still doing it and loving what we do.”

Their first gallery was across the street from the Surf and Sand in the old Bennett Bradberry’s Art Studio, then they moved to a larger space a couple of doors over, which is now Selanne Steak Tavern. That was back when the space was divided, and they occupied the left side. In 1999, they moved to North Laguna Gallery Row.

Since his return to Southern California, both collectors and artists have acknowledged him as one of the region’s most talented painters of the Classical Realist Tradition. His paintings hang in numerous permanent and private collections worldwide, and he exhibited at the Festival of Arts for over a decade.

Although Whitney has published several books pertaining to his work, a new book featuring his short stories will be coming out this year.

Collectors describe Whitney as “one of the great American artists under the radar.” It’s not a surprise that his work has many collectors – one owns 30 of Whitney’s paintings.

“We’ve become friends with some of the collectors and socialize with them,” Jackie said. “And now we’re seeing the second generation of collectors. A lot of celebrities are collectors as well.” 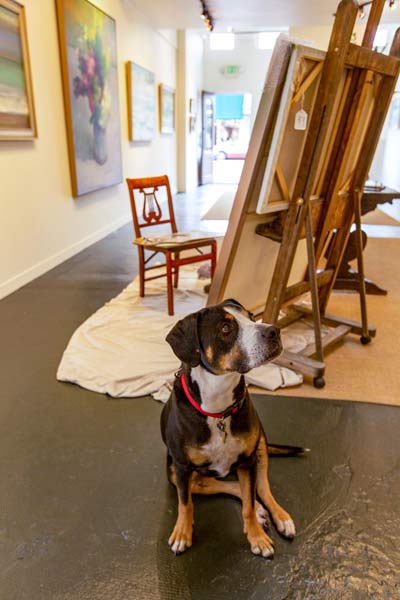 Rickii the official “Ambassador to Art”

Local Perry Stampfel, one of the collectors, just happened to stop by when I was at the gallery. “We’ve known Marc and Jackie for six years and have five of his paintings,” he said. “The bedroom scenes attract us. We just recently remodeled our bathroom and put a bedroom scene over the sink.”

“Commissions are a big part of our business; Marc is now working on four,” explained Jackie.

The commissioning process is very much a collaboration, with Jackie serving as the consultant. “We’re a good team,” she said. “Marc is a great businessperson. We bounce ideas off of each other, but ultimately, we’re on the same page.”

Jackie admits that “art” is not an easy business, but it is an extraordinary one. “We have met so many fantastic people through Marc’s art, and our efforts to keep the art thing going has been challenging at times, but we just keep going. Marc is an amazing artist, and what a special thing to be able to share his work with others, at least I think so.”

Apparently, Rickii feels the same, since her role as “Ambassador to Art” is one she does well – and with great vigor and enthusiasm.